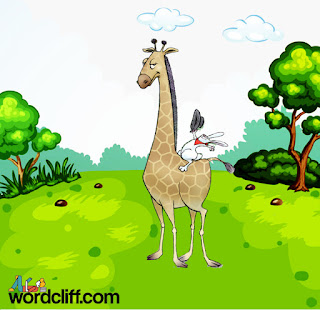 Once upon a time in a far away land an animal named George giraffe met a rabbit named Rusty. George was really boastful and greedy. Rusty had been trying to trick George for years but he couldn't. One day George challenged rabbit to a race. It was going to be a 4 mile race. George didn't stop boasting about the race. The race was 1 day away and fans were setting up at the fnish line. Finally the race was here.

George knew lots of short cuts but promised he would only use them if Rusty was in front. Rusty started beating George so George took a short cut. He got about half way through a trail and suddenly he was trapped in a cage of metal bars. He was stuck! George saw rabbit run by him. George the giraffe kept gnawing and trying to break the bars.

Rusty the rabbit was already on his second mile and giraffe was still stuck. Then one of George's cousins was walking on the trail and she heard George saying, "help, help." Then Gina, George's cousins said, "Hey George, how did you get trapped?"
"Well I was running in a race and I decided to take a shortcut and then I got trapped", George said.
Gina found the latch to open the cage and finally George was out but rabbit was on his third mile. George had to find a way to beat him but without going on a short cut. George was going to take the biggest steps as he could so he could catch up with rabbit. George was 15 ft away from Rusty in four steps he will be in front. Finally, George was winning. They were both 3 feet away from finish line,
"And it is a tie" Jackal said. The crowd kept saying, "George wins, no Rusty wins, no George wins."
Finally George and Rusty agreed to let the crowd vote who wins.
“Okay, okay, quiet. "We have decided to let you vote who wins," said George.
"Okay everybody out a paper in this bucket and we will count them up and see who wins", said Rusty. Finally everybody has voted and Jerry jackal counted them up.
"The winner is George", said jackal.
Rabbit was so mad.
In the end rabbit and George became enemies and they played tricks on each other every day.